Cycling has many environmental and health benefits for individuals and communities that promote cycling. Unfortunately, our current transportation infrastructure often makes biking inaccessible and dangerous. That fear of riding alongside other vehicles is one of the biggest reasons people are hesitant to bike.1 Although we will need many policy and infrastructure changes to address this issue, my individual project is a technical solution that aims to make bikes more visible and increase the awareness of other road users. To do so, I’ve created a rear bike light that responds to the rider’s speed and tells road users when a cyclist is coming to a stop with a more visible brake light.

This project is a prototype of a speed-controlled bike light. Using a small wheel and a series of low-power LEDs, the setup demonstrates the measurement of speed with a magnet and hall sensor. Then, it responds with the LEDs by turning on a “brake light” when deceleration is detected.

Using an internal comparator, the Arduino translates the analog output of the hall sensor to a digital “on” when the output exceeds the internal 1.1V threshold.2 This happens asynchronously from the main Arduino program, so it’s able to consistently track when the hall sensor detects the magnet and records that time. The Arduino keeps a track of the time between these “pings” and records this period to a short list.

When updating the LED state, the Arduino references this list and compares the latest entry to previous entries to detect an increase in period. A large increase in the measured period indicates the wheel is decelerating and activates the solid braking light. After a few moments with no detected deceleration, the Arduino returns the LEDs to their normal flashing state. 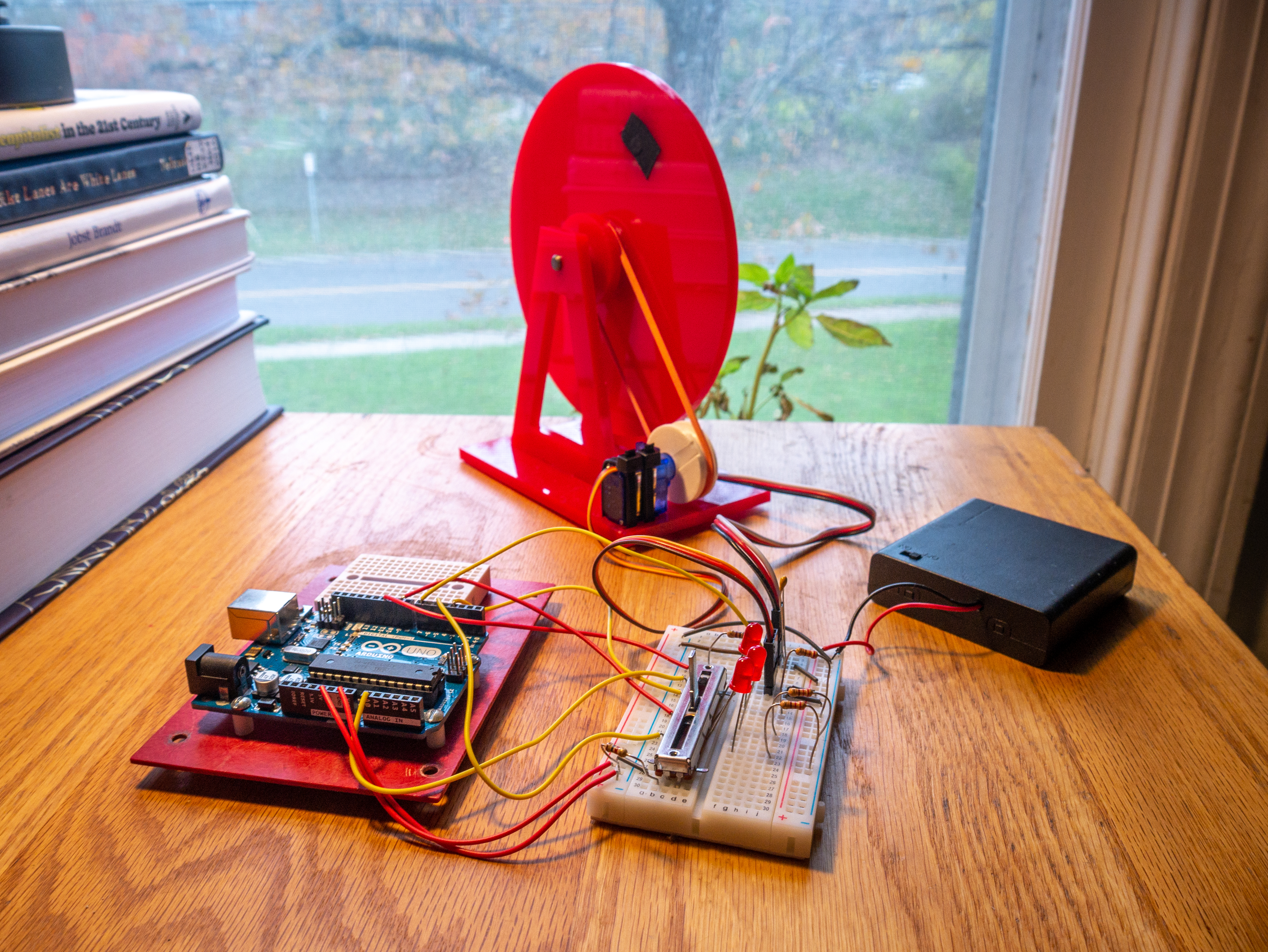 This design functions well as a prototype. However, there are several changes I would make to improve the reliability. The hall sensor, combined with the Arduino’s internal comparator, was difficult to tune and often gave inconsistent readings.

A reed switch of the correct sensitivity probably would have a been an easier sensor to work with for a similar price. The binary operation of the read switch would be easier to program around and likely less susceptible to interference.

If additional resources were available, it would be interesting to put the device into a form factor that could have been used on a bike. Creating an enclosure and using more powerful LEDs would make it more applicable to the road.

The mechanical assembly is laser cut out of 0.25in acrylic and then assembled into the 3D structure. See Appendix C Fig.1 for part dimensions, and Appendix A for other materials.

The three smaller wheels should be glued to the 6” one about the same axis. The two 1.25” wheels should go next to the 6” one, and the 1.5” wheel on the other side of one of those to form a pulley where the rubber band can rest. Once the glue is dry, press in the bushings, tape the magnet into the small off-center hole, and loop the rubber band around the wheel pulley.

Once the wheel is assembled, place the triangular stands into the slots of the base and press the metal rod through them, supporting the wheel in the middle. Secure the stands to the base with glue, then attach the servo to the small slots in the base using zip ties. See Appendix C Fig. 3 for a view of the completed assembly.

The servo uses a 3D printed pulley (see Appendix C Fig. 2) to hold the rubber band. First, install the 2-pointed lever attachment included with the servo, then attach the pulley on top of that with one of the included screws.

Finally, tape the hall sensor to the stand at the same radius as the magnet, and wire the rest of the components as shown in Appendix B. The hall sensor may need to be adjusted slightly to ensure it detects the magnet consistently.

The only user input to the device is the slide potentiometer. Moving it along the track will increase and decrease the speed of the wheel. At steady speed and while increasing the speed, the lights flash normally. Then, when the speed is decreased suddenly, the lights go solid to indicate braking.

Fly Wheel and Base to Laser Cut (DXF)

Appendix A: Bill of materials

The circuit diagrams are broken up into three separate sections. Both the hall sensor and servo are run off the 6V battery pack but communicate with the Arduino. The LEDs and potentiometer are both powered by the 5V Arduino and use input pins but are otherwise discrete circuits. 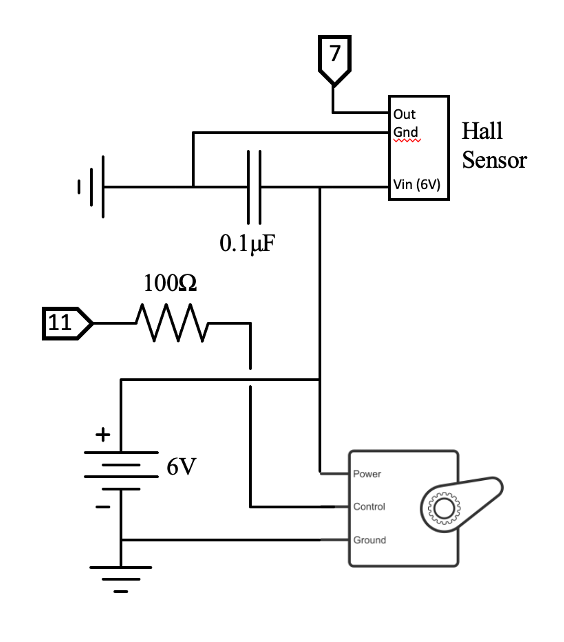 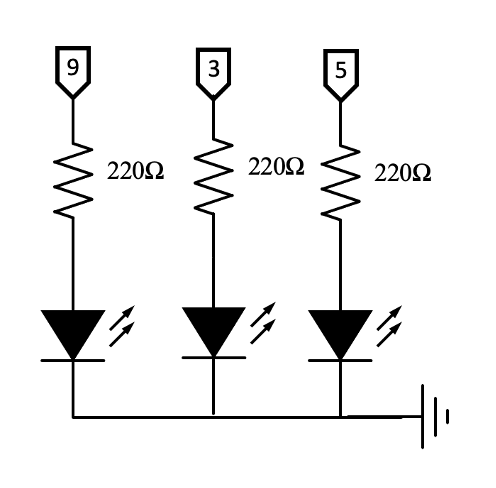 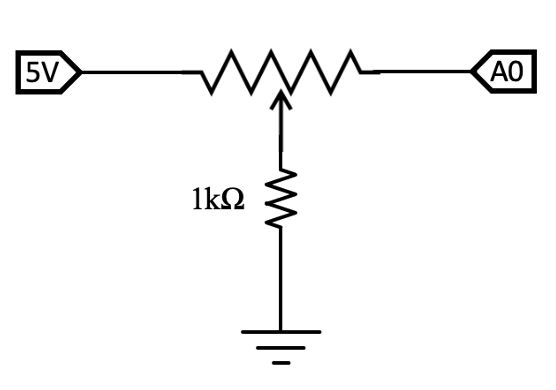 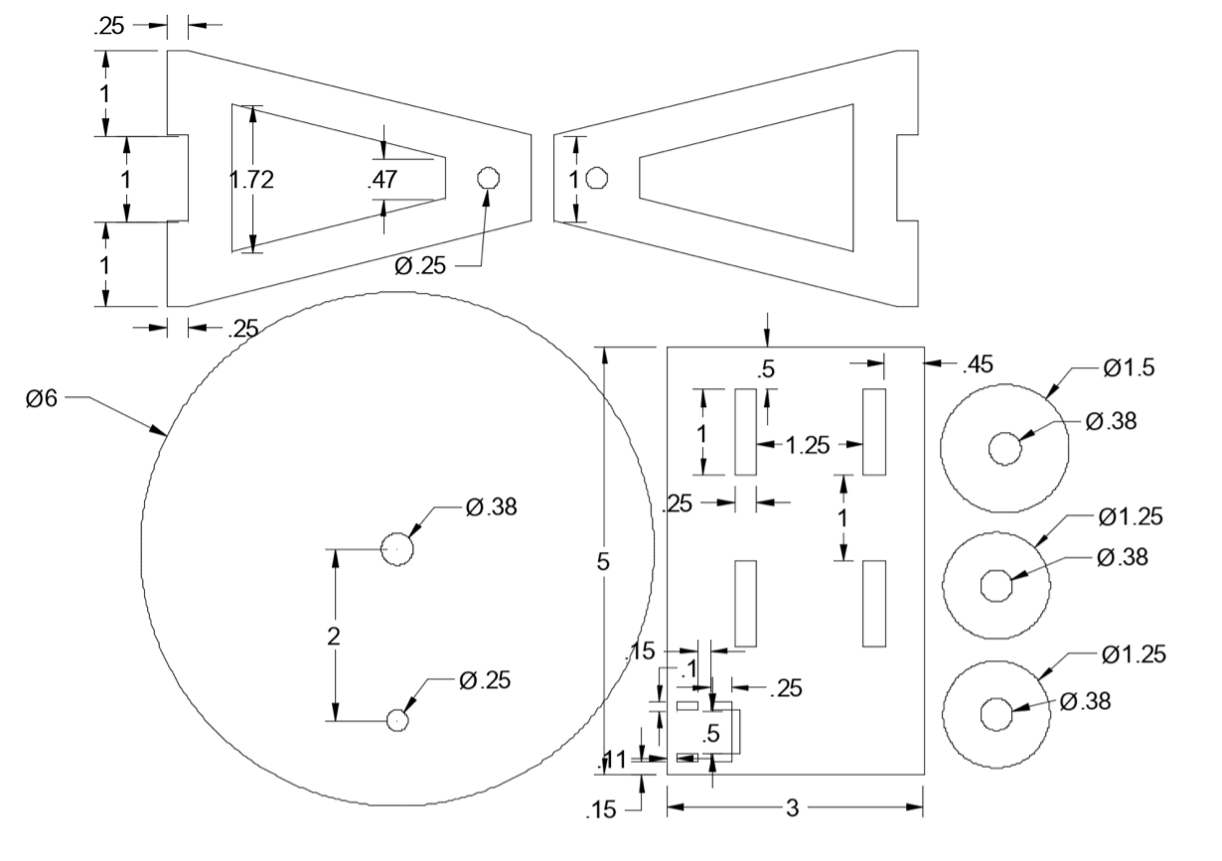 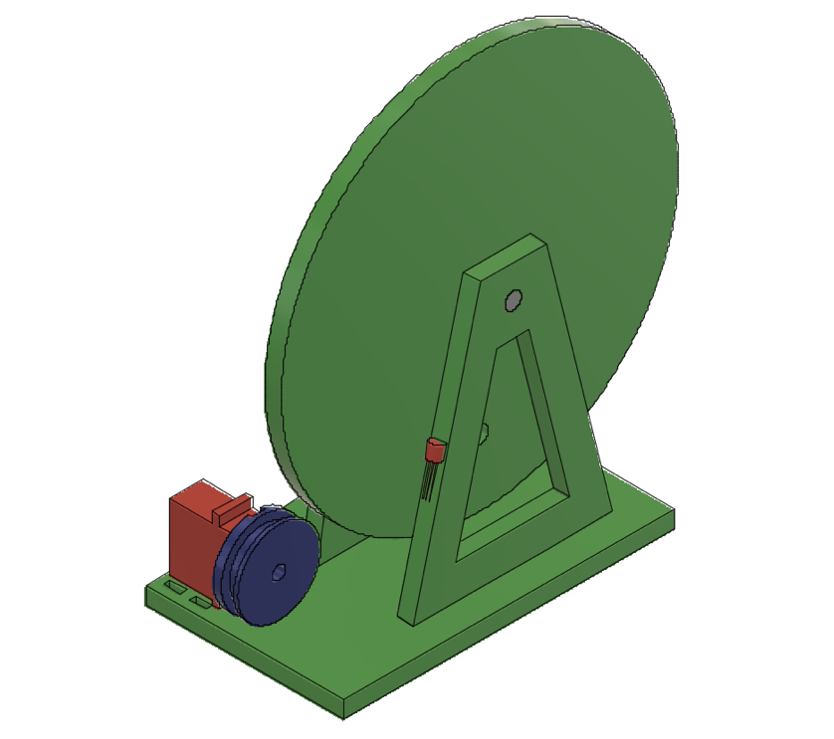